Kip Moore on "Conan" & Craig Morgan on "Rizzoli and Isles" 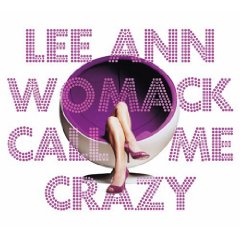 Calling all crazies: Lee Ann Womack's here to call you out…starting with "Last Call," an instant country classic featuring aching heartbreak and alcohol-rocky with a twist. Accompanied by a sufficiently sad video, the piece is the first single from Womack's eighth album, set to be in stores on the 28th. Written by Erin Enderlin ("Monday Morning Church") and Shane McAnally, it finds Womack wandering the streets when her (presumed) ex calls her to pick him up and lays loving lies on her all the while. Of special lyrical prowess are the changes in chorus from the first to last, describing the descent of song type and a glass of Johnny Walker Red. Also especially clever is the play of "I'm always your last call – me crazy," probably how the album title was conceived, too.

Elsewhere, there's the unstoppable sentiment in "Everything But Quits," a duet with George Strait (their second together). The Womack/Strait pairing is a straight shot that clearly just comes natural. Southern rock sensation Waylon Payne, who starred as Jerry Lee Lewis in the movie Walk the Line, wrote the smooth "Solitary Thinkin'." And Keith Urban adds a unique flavor to the sweet circle of the five-minute spellbinding story of "The Bees."

Among the other special songs making a stand on Crazy are "New Again" (co-written by Womack); "If These Walls Could Talk," and "I Think I Know." "Know" is beautiful, while also possibly one of the most depressing works ever – with lines like "I think I know what killed Keith Whitley" and "I think I know what took Old Johnny" flowing from the pens of hit writers Tom Shapiro, Tony Martin and Mark Nesler. Recording artist Whitney Duncan also lends in lyrics (on "I Found It In You"). Brent Mason, Chris Stapleton, Wes Hightower, Jason Sellers, and other notable talents share vocals and musicianship to the collection. The album is produced by the acclaimed Tony Brown.

​Crazy is as crazy does, and Lee Ann plays the part with style. ..so she just might be the lunatic you're looking for. ​

Some may consider Phil Vassar mainly a songwriter, but truth be told he brought his show to Nashville's road in search of success as a singer. Somewhere along the way, lavish lyrics and piano man talents were found and fine-tuned.

But this collection is the first to contain his versions of hits made famous by others. Although armed with powerful vocals, the music is somewhat of a disappointment, comparatively speaking. Some instrumentation on these "new" tracks seems strangely subdued in spots. Don't expect the same sounds as from the likes of Jo Dee Messina, either. On selections like "I'm Alright," for example, there's a slow piano introduction that then builds into the romp radio's used to...albeit with some switched-up words: "give the kids a kiss for me" becomes "give your wife a kiss for me." Oh, and Vassar's unafraid to show some cheekiness - this one does indeed include "ass." Elsewhere "Bye Bye," "Little Red Rodeo," "My Next Thirty Years" and "For a Little While" (written with Jerry Vandiver and Sixwire's Steve Mandile) pack a high-energy piano-driven punch.
​
The new "The Woman in My Life" delivers perfect transitions of celebrating women - covering his wife, mother and daughter. The fun "Twenty-One" celebrates that age and changes since. Another life story, current single "The Last Day of My Life," isn't an attempt to copy country's current semi-morbid topical trends, but an honest ode in memory of friend and co-writer ("Rose Bouquet") Robert Byrne that reminds of what's most important. So take this as a yes, Phil Vassar is an artist worth his salt. Nothing's sweeter.